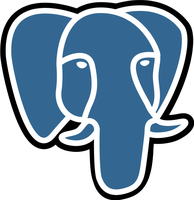 Postgres has established itself as a formidable, fully-featured SQL database and is threatening to display MySQL as the OSS SQL engine of choice.

Postgres started life in California academia as an almost reference SQL engine. However, its development stalled until it was opened up.

Since then the software has flourished:

Performance has improved dramatically from the early days when stability was the key driver. Once the feature list and rock-solid behaviour had matured, it was possible to begin optimising the engine which is now competitive with many commercial databases.

The feature-list has always favoured a sophisticated set rather than a more pragmatic implementation as pursued by MySQL. As a consequence, the product is now functionally equivalent to the big commercial databases with stored procedures, etc.

Commercial databases such as oracle, SQL Server, Sybase, Adabas, DB2 are generally available on Unix platforms and we have used all of them for clients.

We have also used many of the other OSS databases such as MySQL and MariaDb and non-sql engines such as Hadoop, and Zope